Last Thursday was my first Civil Service Awards ceremony since taking over from Jeremy Heywood as Cabinet Secretary and Head of the Civil Service. We were joined by members of Jeremy’s family, who were able to experience the admiration and affection for him and to participate in an event celebrating the achievements of civil servants across the country of whom he was so proud.

The Awards capture so much of the brilliant Civil Service: from our traditional strengths in policy development and operational delivery, to our more recent digital and commercial expertise, and awards reflecting our timeless values, such as volunteering and diversity and inclusion.

I want to thank and congratulate everyone who was nominated for an award, in every administration, department and agency. The final shortlist included nominations for teams or individuals in all parts of the United Kingdom.

In tackling challenging issues and giving practical effect to big ideas, all the winners demonstrated the impact and teamwork that match the needs of the times, and which should guide everything we do under my leadership.

As I said in my first message to civil servants as Head of the Civil Service, there’s rarely been a more important time to be in public service. It’s a privilege to be part of this great national team and of the wider public service, committed to improving the lives of our citizens, and to the security, prosperity and influence of our country.

The Civil Service Awards showcase the best and set the standard for the rest of us. Congratulations again to all those nominated. I hope we will see even more next year.

The Diversity and Inclusion Award

The Health and Wellbeing Award

A to Z to Better Wellbeing Team (various departments)

The Use of Evidence Award

See full details of all the winners here. 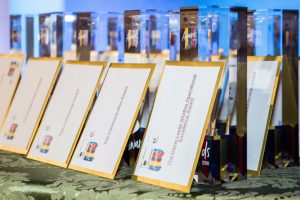 View a short video of the Awards ceremony.