I blogged earlier this year about starting conversations around the practice of different faiths and belief systems as a way of getting into what can feel like tricky territory.  Conversations need people to make them happen, so I have been building a network of departmental Faith & Belief Champions to help me by promoting faith literacy and inclusion in their departments.

The network met for the first time in July, and we discovered quickly that we are a diverse group. For a warm-up exercise, we silently sorted ourselves by length of time in the civil/public service, and found that the timeline stretched from new arrivals to those with over 30 years under our belts.  As we began thinking about how we could work together, some common themes emerged. First was the need to set out simply how faith & belief fits into the wider picture of diversity and inclusion. We’ve now done that, and this will inform our future activity and messaging.

Another area we agreed on is the value of developing a toolkit that can be used by anyone interested in understanding more about faith and belief themselves, or sharing with colleagues. It’s clear that a lot of really useful material exists already, so it’s less about creating, more about making it easily available. Watch out for news on this soon.

And then there’s the collective enthusiasm for ‘making some noise’ about faith and belief.  For that, we’re focusing our efforts on Inter Faith Week (11-18 November), joining in with events taking place across the country involving people of all faiths and beliefs and none. Thanks to the efforts of departmental faith & belief networks, cross-government networks and departmental champions, a range of events are celebrating and building on the contribution that people of different faiths and beliefs make to the Civil Service and wider society.

The events have a common theme of conversation, starting with the launch event on Monday 12 November, 'Let’s talk about faith and belief'.  You can learn about Judaism in the Ministry of Housing, Communities & Local Government, Taoism in the Department for Work & Pensions, or the Sikh faith in the Environment Agency.

An interdepartmental event on Thursday 15 November will explore 'Faith in a crisis: are faith & belief groups the new first responders?' Alongside these events, a number of departments are taking the opportunity to launch faith and belief networks, and departmental champions will be blogging about their experience of faith and belief. 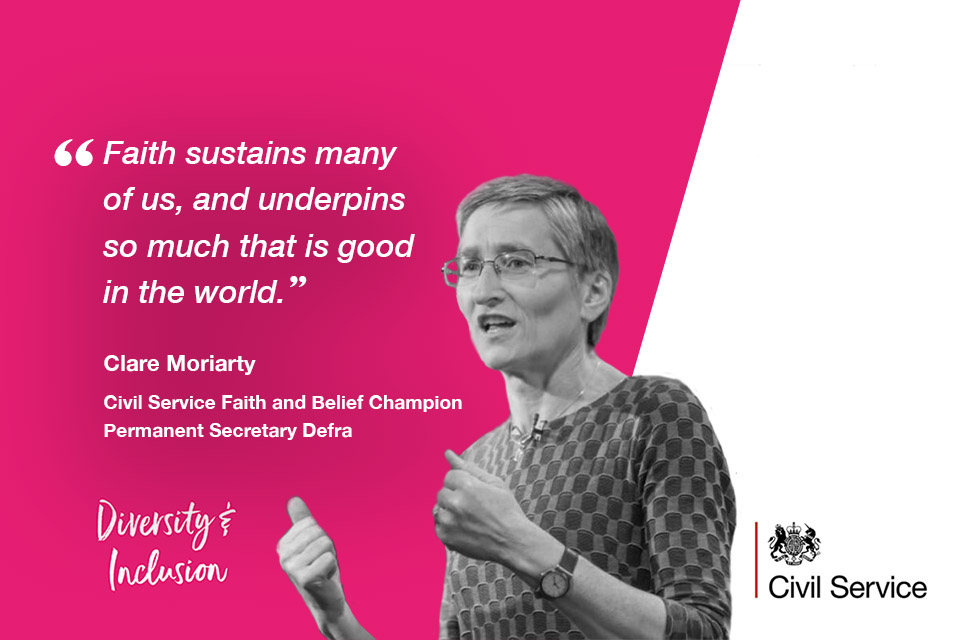 It’s no coincidence that Inter Faith Week coincides with the Armistice 100 celebrations.  Each year it starts on Remembrance Sunday, highlighting the diversity of those who served in the two World Wars and in later conflicts. This year, we will particularly remember the soldiers who sacrificed their lives in the First World War. They came from the UK and from the countries that became the Commonwealth, from all faiths and beliefs and none.  There are accounts of Muslim, Sikh, Hindu, Christian and Jewish soldiers fighting side by side, with their respective chaplains, rabbis and imams jointly taking care of the dead.

Among the many commemorations that will be taking place across the country, in a ceremony at the Guards’ Chapel on Wednesday 14 November we will remember the civil servants who gave their lives.

So, what do we want to achieve with this burst of activity?

My hope is that a concentrated focus on faith and belief during Inter Faith Week will bring it firmly into the diversity and inclusion agenda, raise awareness and encourage people to be more confident talking about how they bring their faith or belief to work. So please do look out for events going on in your organisation, and get involved.