My name is Ross. I’ve been a civil servant for three and a half years, having worked in the Home Office and Ministry of Defence for the last two years. In addition to my day job I'm co-chair of Sh..OUT!, the Ministry of Defence’s LGB&TI Network.

I’ve been involved in diversity and inclusion (D&I) for a number of years, so when I joined the MOD I was keen to be an advocate for LGB&TI individuals working in defence.

Many people perceive working for the MOD to be quite a macho environment where diversity isn’t a priority. In reality it is quite the opposite. Since I’ve been working here I have seen a significant amount of positive change, and diversity and inclusion is a priority across our department. 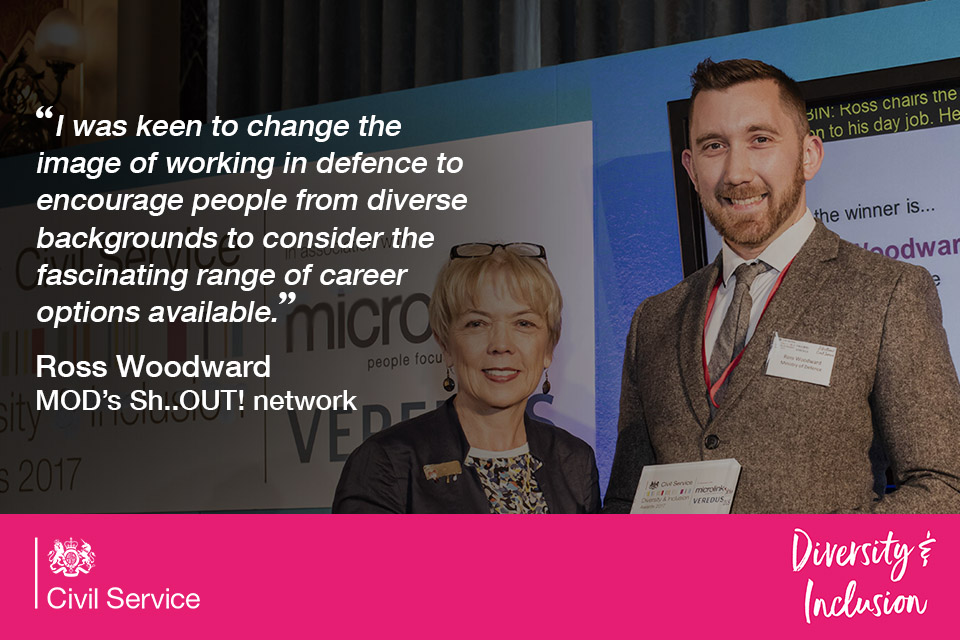 How creating a network of straight allies helps champion inclusion

I was keen to change the image of working in defence to encourage people from diverse backgrounds to consider the fascinating range of career options available. When I was setting up the committee, I was pleasantly surprised to meet two individuals who didn’t identify as LGB&TI but wanted to get involved and support our network. I had met my first two allies!

We discussed creating a specific ally network to have visible individuals across defence championing an inclusive environment where people can feel comfortable to bring their whole self to work. We decided to hold an ally launch event during LGBT History Month in February, to raise awareness of the importance of allies.

A lot of people say, “it’s 2017, it doesn’t matter if you’re gay, bi or straight”, but the reality is many LGB&TI individuals are bullied and harassed because of their sexual orientation and gender identity.

One of my colleagues spent the first 10 years of his career 'in the closet'. He didn’t feel comfortable and confident enough to come out at work. Through reverse-mentoring he built up the confidence to come out, and has now become a strong advocate of LGB&TI equality and awareness.

We didn’t expect a large turnout, so we were overwhelmed that the room was full, and people stood wanting to hear what we had to say. My colleague spoke about his experiences of not being out at work and how stressful it can be to lie about your private life. The number of people wanting to stand up and speak out for the LGB&TI community was inspiring. We had not expected such a successful event.

Following the event we ran Stonewall’s Allies training programme, and then, because we were so oversubscribed, we ran a second course. Our ally network is continually growing as more people hear what it means to be an ally and how you may already be one without knowing!

So what do allies do? Well, as I mentioned, you may already be an ally! Being an ally does not require any training, although the course run by Stonewall is an excellent opportunity to explore your conscious and unconscious biases and make you think about how your behaviour and use of language can make others feel less included.

Being a visible ally is key. You can do this by adding something to your signature block, or having posters, or simply wearing an ally badge. Using inclusive language such as ‘partner’ avoids the awkwardness of someone having to correct you that their other half is actually the same sex. Most of the time, people won’t be offended if you make a mistake using terminology you’re not familiar with but want to understand. Most of all, treat people with respect regardless of what makes them different from yourself.

Ross Woodward won the 2017 Diversity and Inclusion Award for Championing LGB&TI Inclusion for his work setting up Straight Allies at the MOD. He is shortlisted for the 2017 Civil Service Awards (announced on Thursday 23 November).

Find out more about work underway to improve inclusion in the new Civil Service Diversity and Inclusion Strategy.