Anoushé discusses her career in the Civil Service, achieving success at Team GB trials and why difference at work is important.

I’ve been in the Civil Service for nearly four years now. Four years seems like a very long time for a career I had never considered and where, before I joined, I thought I would never fit in. 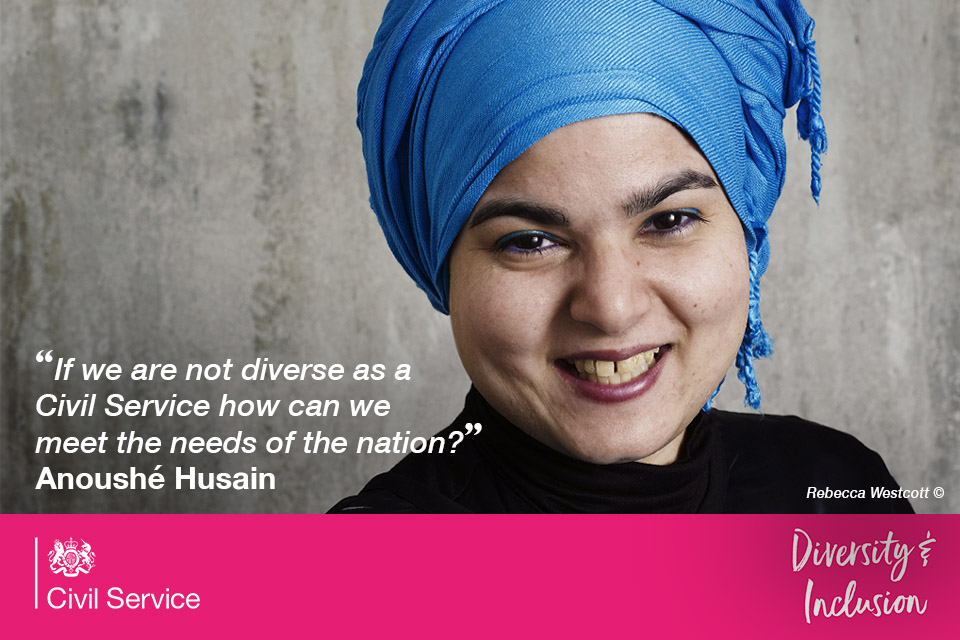 I’m Anoushé. I was born and grew up in Luxembourg; and I’m probably one of the more diverse people you’ll come across in life: from missing my right arm below the elbow, to living with multiple chronic health issues, being a cancer survivor, and coming from an ethnic minority and wearing a headscarf. I have lived in four countries over the last 10 years and speak eight languages. When I’m not in the office, I work with multiple charitable causes and climb semi-professionally, with my eyes set on a spot on Team GB if I do well this year.

I had originally set my eyes on working for the United Nations or in politics, so I went about learning the official languages of that organisation. With a degree in translation studies under my belt, I went on to study for a degree in European Politics and started wearing my headscarf. The attitude to me choosing to dress differently in Luxembourg was obvious. By making the choice I had, I could no longer expect to work in a public-facing role, or frankly, any role. People were looking at the visible me and not the person underneath, who could bring so many skills and experiences to the workplace.

Thankfully, I didn’t listen to any of that! My career started off in the Luxembourg Parliament and then the European Parliament. Both were great places to work, but I felt quite boxed in by others' perceptions of me. This led me to look wider. I enjoyed the idea of being in some form of civil service and, being British, I thought, why not try and apply and make a move to the UK? Worst case: I won’t like it, but at least I will have tried.

I applied and got through one of the general recruitments for the Department of Energy and Climate Change (now part of BEIS, the Department for Business, Energy & Industrial Strategy). Little did I know that I would end up working on renewable heating for industrial buildings and stakeholder engagement. I think that’s what struck me most about when I started my first role. If you are intending to be a policy advisor or a generalist, people expect you to know how to learn, do the learning and then do your job. You don’t necessarily need to know about the policy area already.

The other thing that struck me was that I didn’t feel any judgement towards me about wearing a headscarf or needing to attend medical appointments. My interests outside the office were encouraged; everyone knew I was new to the UK and wanted me to settle well, with a good work-life balance.

After a few months in the role, I wanted to try something more stretching and different. I moved to a role looking at carbon trading and emissions. This was highly technical stuff and, frankly, scientifically too complicated for me to understand in detail. But that didn’t matter. I was hired because I had managed to show I could learn, adapt and do what needed to be done. Things went so well that I was also put onto a competitive talent programme; and the talents that I use outside the office, such as public speaking and mentoring, were being put to good use in the office. I felt appreciated for who I am.

I have since moved role again, to something more challenging but still very related to energy. The technical knowledge required in this role is even more demanding, but I’m enjoying the learning curve.

Work-life balance has been crucial since moving to this role, as my health picture changed massively. I also now train as a climber, and need time to go to competitions if I stand a chance of representing the country.

I was relieved to find that, for the most part, my need for more flexibility has been met and, as with any role, there might be sticking points. But that’s OK. I have decided that I really enjoy being a civil servant, because it allows me to be the person I choose to be. I’m accepted for who I am. And the range of available roles is so varied that even if your life does change a bit, you’ll probably find something that will work within your new circumstances.

Read about work planned in the recent Civil Service Diversity and Inclusion Strategy, which sets out how we will become the most inclusive employer in the UK by 2020.