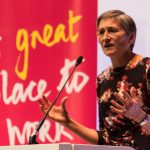 On a bitterly cold Saturday in January, 200 people from all around the country descended on the National Audit Office in Buckingham Palace Road.  We – for I was one of them – were the lucky winners of a heavily oversubscribed ballot for tickets for the 10th UK Govcamp.

Govcamp is the free, annual ‘unconference’ for people interested in how the public sector does digital stuff.  The essence of an unconference is that there is no pre-set agenda, and no distinction between speakers and participants.  The content emerges from a pitching process at the start, when anyone attending can propose a session – in no more than 30 seconds – which they then take responsibility for leading.

If you think that sounds like a recipe for chaos, you’d be wrong. Without an agenda, the success of an unconference depends on fearsomely efficient organisation. Key to this is the pitching session at the start.

As people pitched their ideas, Govcamp’s brilliant team of volunteers swung into action, allocating sessions across five time slots and eight rooms of varying sizes, to generate a wall-sized grid that was our guide for the day.

The breadth of the sessions that emerged was amazing. The digital focus did come through clearly, and some of the sessions had a tech feel to them, but by no means all.  Diversity featured strongly and I went to a session called #bookcamp, which has since spawned a virtual book group.

With some trepidation, but encouraged by the supportive atmosphere of Govcamp, I pitched a session on making government open by design and in operation.  Why waste an opportunity to get ideas from a great group of interested and engaged people?  It generated a fascinating conversation about different tools for engaging with people inside and outside government; how we can balance openness with the need to be able to account for our decisions; and whether Civil Service leaders are yet ready to embrace unconferences.  (I don’t have an answer to that one yet.)

There were plenty of other things I could have been doing on that Saturday in January, but I’m really glad I went to Govcamp.  The event radiated energy, enthusiasm and enjoyment.  It was inclusive. And it was open at many different levels.

I’ve reflected before that the things that make the biggest difference in terms of open government often have an element of ‘undesign’ about them. The process that led to Defra releasing 10,000 datasets in a year is one.  And the unconference format is another, with its neat balance of informality and purpose.

The Defra group’s data community held a successful unconference last year, and are planning a DataMash jointly with the Ordnance Survey on the theme of transformation of data-driven organisations. But you’ll note that unconferences seem to be happening mainly in the data and digital community. To return to the question posed at my Govcamp session, are we ready to try this more widely in Government?

It certainly feels safer to keep control of the agenda ourselves. That way, we know what people should be getting out of an event. But we don’t really know if it’s what they are getting out of it.  It’s often the conversations in the margins of a conference or team event that are the most valuable part.

In thinking about what it would take to let participants set the agenda, the answer seems to me to be trust.  If we’re prepared to trust people to use the time to have worthwhile conversations about issues that really matter, then what do we have to lose?  I think it’s worth giving that a go.  Watch this space!