“You mean this place we go to five days a week has a history?” So states the cover of ‘Cubed: A secret history of the workplace’, Nikil Saval’s humorous book on the places in which office work is conducted, published a few months ago.

Today’s government workplace has a rich and fascinating history that helps to explain the way work happens today. Evidence still abounds of ideas that were first expressed one and a half centuries ago. However, the threads of continuity are increasingly being altered by disruptions in the way we work.

Stafford Northcote, later Chancellor of the Exchequer, and Sir Charles Trevelyan, permanent secretary to the Treasury from 1840-59, first articulated the importance of the physical workplace in their 1854 report, at the start of the modern Civil Service. At that time there were just 15,000 civil servants, compared to 400,000 full time equivalents today. Trevelyan believed firmly that “next to the appointment of proper officers, the thing most conducive to the public service will be to have proper offices”. He went on to write:

For the intellectual work, separate rooms are necessary so that a person who works with his head may not be interrupted; but for the more mechanical work, the working in concert of a number of clerks in the same room under proper superintendence, is the proper mode of meeting it …

The efficiency and effectiveness of the work are recurring themes linked to the way people are grouped in their office buildings. Fewer staff and faster communication would be aided by clustering people from separate small buildings into larger, purpose-designed structures. The 1887 Commission enquiring into civil establishments further stated: “We strongly recommend . . . concentrating a number of clerks in large rooms. Supervision would thus be much better effected and by fewer hands.”

The health of civil servants in offices was another focus of 19th-century Civil Service leaders. Daylight was essential for reading and writing, as was good quality heating and ventilation. Candles or gas lighting caused fumes that had to be dispersed. Heating similarly depended on ventilation.

So the health of workers, the relative merit of enclosed and open offices, and their impact on effectiveness, are longstanding concerns. Other continuing threads are reducing the cost to taxpayers, and the aesthetic appearance of government buildings, so that they to provide an aura of dignity without opulence.

To control costs, space per person has been an ongoing concern. Standards devised in 1868 provided for an eightfold difference between the allocation to the most humble clerk and the highest level of officer from 60 to 500 square feet (5.6 to 46 square metres). The years of austerity after the Second World War slashed space standards for officers by half, but they were soon restored and expanded from the 1950s until their eventual abandonment in 1990. In 2013 much stricter space standards were enforced, initially at 10 sq. m. and then down to 8. 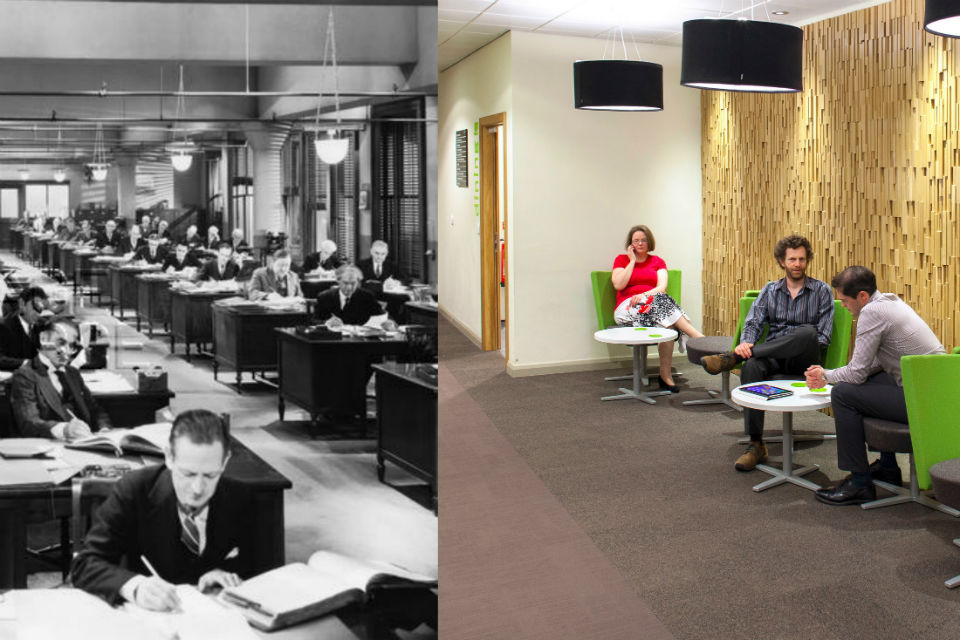 New issues do emerge. Environmental and energy concerns have multiplied, with strong incentives for reducing carbon emissions. But the most significant is disruptive digital innovation, which has divorced the earlier link between work and workplace. “Work in the 21st century is about what you do, not where you do it.”

What might this mean for the future government workplace? Clearly, the importance of the physical office needs now to be balanced with the essentials: IT tools, ubiquitous connectivity in and out of the office, and all the associated safety and security implications. The TW3 (The Way  We Work) Awards, announced this January, demonstrated invention, ingenuity and leadership across many government departments. By linking their departmental vision with management, HR, space, and IT, they are pioneering examples of future work.

What is fascinating is that the new solutions still show a concern for the earlier concerns of the leaders of the Civil Service: efficiency and effectiveness; cost to taxpayers; the right space for the work; and the health of the staff. I offer the thought:

“You mean this place we go to five days a week has a future?”