Thirty four years, and still going strong, October has marked Black History Month here in the UK. But what is it, and how does it impact civil servants?

As Black History Month draws to a close, it’s got me thinking about the annual event that raises awareness and celebrates the proud heritage and achievements that trailblazing Black people across all generations have made throughout history - and continue to make.

BHM builds a solid base and narrative to learn about history from a Black perspective. This year’s campaign theme ‘Proud to Be’ invited Black people around the UK to share why they’re Proud to Be for a festival of celebration throughout October. Here in the Civil Service, a series of cross-government internal events took place to celebrate the history and contributions of African and Caribbean men and women in British society.

The Cabinet Office hosted an event on the honours system, celebrating Black civil servants who are deservedly ‘proud to be’ honours recipients, sharing their experiences of what it’s like to be awarded an honour, and why it’s important to recognise those in our workplaces and communities making an exceptional contribution. Inspiring stuff!

Talking of pride, the UK Civil Service is ‘proud to be’ a rich, diverse organisation - a truly welcoming and inclusive workforce - for people of all generations, colours and creeds, who feel valued and respected for who they are and what they can contribute to improve life for all our citizens.

One senior Black civil servant is Bernadette Thompson OBE, Deputy Director for Inclusion, Wellbeing and Employee Engagement at the Department for Levelling Up, Housing and Communities (DLUHC).

Bernadette joined the Civil Service in 1998 starting with the Legal Aid Board and quickly climbed the ladder, holding a string of key posts across many government departments including the Ministry of Justice, Home Office, HM Treasury and Cabinet Office.

A notable diversity campaigner, Bernadette worked closely with government leaders, forging a culture of inclusion, where she champions representation of BAME staff for senior grades so race can no longer thwart career ambitions.

Bernadette co-chaired the award-winning Race to the Top G6/7 network, helping boost the career prospects for BAME Grade 6/7 employees across government departments and agencies. Away from Whitehall, Bernadette is a school governor and volunteered as an athletics official in both the 2012 Olympics and the 2017 World Athletics Games. Last year, Bernadette was awarded an OBE for services to diversity and inclusion.

Get to know - Bernadette Thompson on Black History Month

Why does BHM matter for the Civil Service?

We are privileged to serve the diverse communities of the UK, therefore as an organisation we must do what we can to become more culturally intelligent. BHM is an opportunity for the Civil Service to better understand the Black British community so we can better support the needs of this community through our policy making.

Does the Civil Service do enough to attract, promote and retain Black, Asian and minority ethnic staff?

Over the past few years, we’ve made some progress to attract, promote and retain Black, Asian and minority ethnic colleagues. However, there is still much more we need to do to ensure that we are representative of the communities we serve, across all our grading structures from Administrative Assistant right through to Permanent Secretary level.

What inspires you to encourage better representation and mentor colleagues to encourage the next generation - of all colours - to come through?

I believe the children are our future, therefore it’s absolutely critical for our young people to see diverse, visible role models who they can aspire to become. Our young people must feel that they’re operating on a level playing field, and they have a fair and equal chance to thrive, flourish and have a fulfilled career in the Civil Service and the public sector more broadly.◼︎

As is the norm, there have been a lot of BHM stories in the press this month. They celebrate pride in the past, but also show we can also have confidence in the future. As the Civil Service, we both serve and represent the citizens of the UK so it’s paramount that we’re a good reflection of society and the people who we work for every day. The latest data from Civil Service Statistics (March 2021) shows there are 56,860 civil servants from an ethnic minority background (14.3% of civil servants who declared their ethnicity).

This year’s BHM theme ‘Proud to Be’ is pretty apt when thinking of countless successful Black colleagues successfully shining a light across a variety of areas. 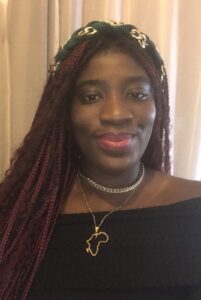 You only have to look at Abigail Agyei [left] from DLUHC (then MHCLG). At the 2021 Civil Service Awards in February, Abigail snapped up the Rising Star Award for her work supporting marginalised and minority communities. Notably, Abigail worked with the Grenfell community as well as with faith and Black, Asian and minority ethnic communities as part of DLUHC’s pandemic response, and was instrumental in leading on race in the Civil Service.

A month later at the Cabinet Office Awards 2021, Shernett Ranson scooped the prestigious Diversity & Inclusion Award for her work as co-chair & wellbeing champion in the Cabinet Office Race Equality Network. But Abigail and Shernett are no exception. Whilst BHM tells the story of contributions made by their forebears to British society, Bernadette, Abigail and Shernett are bringing the story bang up to date.

Bernadette, Abigail and Shernett are just three people among many, reinventing proud values within a Civil Service that values all employees regardless of background, where everyone can contribute and feels valued.