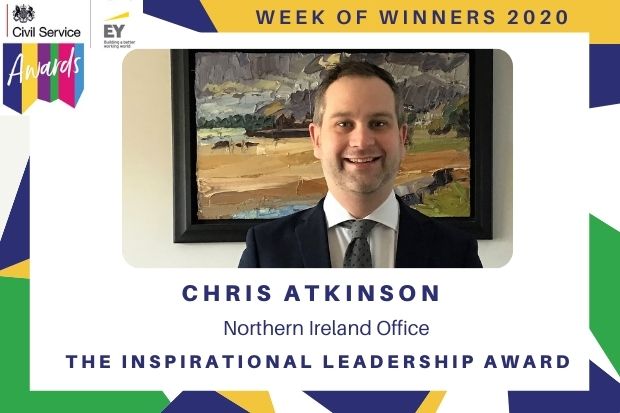 Chris Atkinson from the Northern Ireland Office scooped the highly-coveted Inspirational Leadership Award. Chris drove the work to establish a payments scheme to recognise and support people living with permanent disablement caused by an incident related to 'The Troubles' in Northern Ireland.

Dame Shan Morgan, Permanent Secretary at the Welsh Government, announced Chris’s win, emphasising that by placing people at the heart of his approach, Chris pitched a way forward, focused on practical action and ensured a sensitive framework for managing political differences.

“Chris's passion for making a difference to the lives of these vulnerable people is impressive and commendable.”

Chris led the work to develop, consult on and legislate for the scheme, which aimed to acknowledge the harm caused to the people affected. He worked with colleagues in the Northern Ireland Office, lawyers in NIOLA, the victims sector, staff supporting other similar schemes, the Northern Ireland Civil Service (NICS), medical experts and many others to draw up parameters for the scheme.

They ran a public consultation on the proposal, then laid a Statutory Instrument to establish the scheme by January 2020. It was then handed over to the NICS to deliver it.

Speaking about his win, Chris said: “I was completely taken aback.” He hadn’t expected to win, having been so impressed by the others in his category. The shock quickly gave way to “huge gratitude” at having had the opportunity to work with some “amazing people...to do something that would make a practical difference to people’s lives.”

Chris described the extended team as “fantastic”, and reiterated that “the really inspiring people here are those victims and survivors of the Troubles who live their lives with grace, compassion and courage after suffering through terrible atrocities.” He noted that “it was a privilege to work alongside some of them to make this happen.”

In his day-to-day work, Chris is motivated by “knowing that what we do in the Civil Service makes a tangible difference in people’s lives,” a reminder that helps him put his work in context. Chris enjoys listening and talking to people, as well as stepping back to analyse, read and reflect on what’s going on, and always tries to maintain a balance between both of those.

Chris still continues to fall  back on advice he was given early on by one of his first bosses, which is to “establish the facts.” Chris describes this mantra as “foundational,” being seemingly obvious, but enduringly relevant.

For Chris, working on Northern Ireland-related issues remains “an enormous privilege.” For him, the best part of working at the NIO was “the sense of team; of all in this together.” Whether meeting incredible people, working on things that make a practical difference to people’s lives, supporting ministers with decision-making, “you get to do it all with people who are passionate, resourceful, thoughtful and committed.”

Since this project, Chris has joined the staff team at the Independent Reporting Commission, an independent body which reports on work to tackle paramilitary activity in Northern Ireland.

He says: “I’ve loved it so far and am really looking forward to the challenges in the year ahead.”