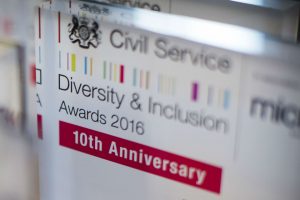 The 10th anniversary Civil Service Diversity & Inclusion Awards were held recently in the Locarno Room at the Foreign & Commonwealth Office.

It was a grand setting for an important event. It marked the brilliant work of many committed individuals dedicated to making the Civil Service a better reflection of the society we serve and removing the barriers still faced by some because of their gender, ethnicity, disability or sexuality, particularly in reaching senior positions.

New figures from the Office for National Statistics show that the proportions of civil servants who declare a disability (9.2%) and those who are from a Black, Asian or minority ethnic background (11.2%) are at record highs. Currently, 54.2% of the workforce are women.

As the Civil Service Diversity Champion, it is immensely gratifying to see the individuals and teams working for greater inclusion and opportunity get the recognition they deserve and contributing to this improving picture. Nevertheless, the fact that we need the awards reminds us that we still have some way to go before we achieve our ambition of making the Civil Service the most inclusive employer in the country.

The awards attracted 147 nominations from all corners of the Civil Service. The winners in each category were:

“Our RESPECT plan for understanding your colleagues, their ethnicities and working together to achieve a common goal will be rolled out across the visa network. We’ve already rolled it out in the Africa network so hopefully it will be a shining example for the rest of the world.”

Asked how she hoped her work was contributing to greater diversity and inclusion across the Civil Service, Ellie said: “This year we’ve seen a massive increase in female representation in SCS and it keeps increasing.”

“We’re extremely proud and honoured. The award showcases what we’ve been able to deliver over the last couple of years since the emergence of the network. It’s especially meaningful for us because it represents what we do for our members, who are our army of volunteers when it comes to pulling together and delivering events across the department.

“We hope that this will provide an extra drive for other networks in our department and among our members to continue supporting us and being involved and championing diversity and inclusion in the Civil Service.”

“This is the culmination of a lot of work since April 2014. We hope that some of the things we’re doing, such as the LGBT superstars, are leading the way more widely across the UK. That idea, which we created in Wales, was adopted by the Cabinet Office and used by them, so I suppose our contribution is about sharing good practice and good ideas. We’re also quite pleased with our progress on the transgender agenda. We have a pan-Wales trans champion, so we’d like to see that in every department across the Civil Service.“

“I’m grateful to my colleagues who helped me deliver the pieces of work that I’ve done, and also for some great support from our senior leaders, including our Permanent Secretary. I like to think that BAME staff and disabled staff will get more opportunities across the Civil Service because of what we are doing, and that they believe there is an opportunity for everyone out there. “

Closing the event, Head of the Civil Service Jeremy Heywood congratulated all the winners and everyone who had been nominated. The awards, he said, were “about the sheer commitment of brilliant people. About representing the different points of view that provide the best advice for ministers and the best service for citizens. Our challenge is to make sure the people who join us have an equal chance of progression to the top.”

You can read more about the programmes and initiatives behind the winning of all the awards on the website.

The winners in each category will now be considered for the overall Diversity and Inclusion Award in the Civil Service Awards, which will be presented at Lancaster House in November.