It seems gradually to be dawning on a few more people that the Civil Service has been one of the nation’s greatest productivity success stories of the last few years.

We have taken out billions of pounds of cost, and across the whole of the Civil Service we are delivering more with less.

Examples abound. Just look at HMRC. We all know that it is a lot smaller – by tens of thousands - than it used to be. But this year it handled more than 10 million self-assessment tax returns – at a rate of over 800 a minute at the peak of the filing season (which, this year, was the lunch hour, between 1 and 2pm, on 30 January).

Given some recent newspaper headlines, it is also worth reminding ourselves that HMRC answered 95% of phone calls first time on deadline day.

Real lives behind the statistics

To take another example, record levels of employment reflect the work of DWP  colleagues in jobcentres. Behind these statistics are real lives, changed. DWP Permanent Secretary Robert Devereux told me about one DWP work coach who persuaded two brothers, on benefit for 18 months, to try the Army's Be the Best course in the late summer. Both joined the Reserves, and both are now in full-time work. One is employed by a local surveyor, who was impressed by the confidence and the training (driving licences, etc.) derived from the Reserves experience. He also valued someone with a track record of working outside in all weathers! 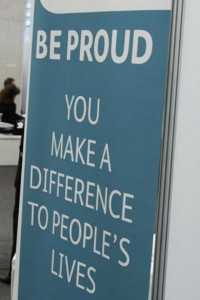 Experience so far with the roll-out of Universal Credit (UC) suggests that it helps people into work faster than the benefits it replaces. And the more work people are doing, the better off they are getting, with the taper system guaranteeing that UC payments fall more slowly than earnings grow (correcting a major disincentive problem we have been struggling with for decades).

Or, in a different field (excuse the pun!), the Land Registry’s MapSearch project is junking a huge volume of paper transactions for a much faster and cheaper automatic computerised service. So far, 130,000 business customers have used it, and 95% have said it saved them time, met their expectations and was easy to use. And it has saved millions of pounds.

One thing all these examples have in common is that they are designed by civil servants who have at the front of their minds the real people who the service is for.

But another thing they have in common is they are all great examples of digital delivery.

Some 85% of self assessment returns were filed online. HMRC’s Online Payments Gateway processed nearly four payments a second on deadline day. The UC roll-out is one of the country’s biggest IT projects.

Contrary to popular myth, we are rather good at digital in the Civil Service. We have our issues from time to time. But so does the private sector (see my earlier blogs).

In DFID, we see great opportunities to help the poorest countries leapfrog their own development journeys by cutting out some of the steps OECD countries took – no need for them to build fixed-line telephone networks, a national branch banking network or even, in some cases, a national power grid. We are trying to build skills across the department to do digital better, so we can help developing countries move faster.

We have had a bit of help building skills from the private sector. But they suffer their own skills shortages, and it turns out that other civil servants may be ahead of the game there, too. DWP’s Digital Academy has so far put 300 people through a foundation course. Of these, 50 have completed a Digital Leaders course; and another 750 have completed Discover Digital awareness days. I am hoping to visit them in Leeds soon.

As we all know, the productivity challenge is still growing. More often than not, part of the solution will be digital. We are wise to invest more now in building our own capability.