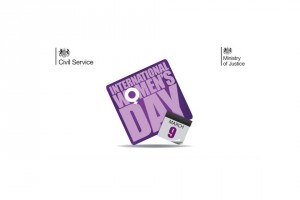 Last Monday I opened the Civil Service event to mark International Women’s Day, very kindly hosted by the Ministry of Justice.  This was a great way to start my time as Gender Champion for the Civil Service. A fantastic group of speakers and events celebrated the achievements of women civil servants over the years. There is no doubt that we have made enormous progress in the last few decades. The days when the Fast Stream was only available to men, and women had to resign from the Civil Service when they got married, are long gone.

Today around 40% of SCS posts go to women, and 20% of permanent secretaries are female. This is better than many private sector companies, but it still isn’t good enough. I am overseeing a set of cross-civil service actions to tackle the cultural and practical obstacles that get in the way, following the Hay report into women in the senior civil service that was published last year

International Women's Day is a catalyst for us to get together as women and discuss issues that matter to us.  This has reminded me how powerful networks can be. I know that many departments already have women's networks and I want to make sure they are all thriving, and to “network the networks” across Whitehall.  Do join yours if you haven't already done so.

I shall also be using my role as gender champion to push for progress on all aspects of diversity. Issues such as flexible working are relevant to disabled staff, carers and fathers as well as to mothers. Culture and behaviours affect the progress of people from minority groups as well as women. I strongly believe that diversity is not just a nice-to-have – if we want to work effectively on behalf of the communities we serve, we must be representative of them. And there is no doubt that mono-cultures can develop if everyone comes from the same background. That’s not healthy for any organisation.

During my time at HMRC some years ago I was disability champion for the department. This was an immensely fulfilling role. We made good progress on practical issues such as reasonable adjustments. Just as important, we began to celebrate openly, as a strength, the fact that 15% of our staff were disabled. I also did “reverse mentoring” with a member of HMRC’s LGBT network, hearing what it was like to work for the department as a gay man and learning about some of the hidden discrimination that could take place. I will be doing reverse mentoring with a member of the DCLG BAME network over the coming months, and I am also going to do the unconscious bias training on Civil Service Learning for a second time. (All our managers should do this training before the appraisal round starts in earnest – and it’s good practice to refresh it, even if you’ve done it before.)

As Simon Fraser outlined in his recent blog, we will soon publish three further reports into the experiences of BAME, LGBT and disabled civil servants and the barriers to progression that they face. We talked about this at the weekly meeting of permanent secretaries this Wednesday – there is real commitment to push ourselves hard in our response.

I look forward to meeting more civil servants across departments in my new role as Gender Champion. Last week was my first as permanent secretary at DCLG and with perfect timing my 11-year old daughter was ill with a classic winter virus.  As I took the phone call from the school nurse I felt the familiar pang of guilt.  It was a reminder that the challenges of being a working mother don’t get any easier when you get promoted.  But as we ended the week back to normal, it was also a reminder that things don’t necessarily get any harder when you get promoted, either. It won’t always be easy.  But it can be done.