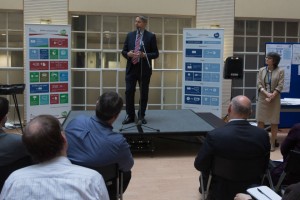 On Monday (27 October) I attended an excellent event organised by the Department for Environment, Food & Rural Affairs (DEFRA) where the department showcased its progress on meeting the government’s better regulation agenda.

Key to this agenda is the Red Tape Challenge – an innovative cross-government programme to tackle the stock of unnecessary and over-complicated regulation, saving taxpayers money, and supporting economic growth by increasing business competitiveness.

In a great example of open policy-making in practice, the programme offered businesses and the general public the opportunity to challenge the government on regulation, and in January 2014 the Prime Minister announced that the government exceeded its target to identify 3,000 regulations to be scrapped or improved. The annual savings to business from the delivery of these reforms is over £850m.

Some reforms that have already been delivered by the programme include:

In order for the programme to reach its target, departments must work hard to deliver their outstanding reforms by the end of this Parliament – a large number of which are in the Deregulation Bill that is currently passing through the House of Lords.

DEFRA is at the forefront of the government’s regulatory reform agenda and is the single largest contributor to the Red Tape Challenge, owning a quarter of all the reform proposals and delivering £300m savings to business per year. DEFRA is also leading the way in the Civil Service’s approach to reforming guidance. DEFRA is reforming 120,000 pages of guidance, aiming to reduce this by at least 80% within this Parliament, making it radically clearer, easier and quicker for people to know what they have to do.

DEFRA has put in place ambitious targets which aim to reduce the number of regulations by 20%. By spring 2015 they are aiming to deliver:

I was proud to see the progress that DEFRA has made so far and I look forward to seeing their progress in tackling their remaining regulations, which will result in more accessible, understandable, and business-friendly government policy.

Further information on Red Tape Challenge reforms can be found on the programme’s website: www.redtapechallenge.cabinetoffice.gov.uk