The Cabinet Office has a big role in supporting UK government departments to understand devolution and how governance works in the UK today. It was as Head of UK Governance Group and a member of the department’s ExCo (Executive Committee) that I went north recently with the rest of the committee to Edinburgh. We were there to learn about the realities of devolution and to build contacts with colleagues in the Scottish Government and with the wider Scottish stakeholder community.

Our colleagues from the Scottish Government face some really tough challenges, including some big changes that are coming through the new Scotland Act. These include extensive devolution of income tax and, for the first time, devolution of new powers over welfare. So there were interesting preliminary conversations. Some eyes were opened about how civil servants in devolved governments deliver great outcomes for their ministers across a wide policy range with a very much smaller policy resource than the one we have in Whitehall.

The ExCo meeting itself took place at Scottish Widows, one of the many financial services businesses located in Edinburgh, in offices with enviable views of Edinburgh's splendid castle. 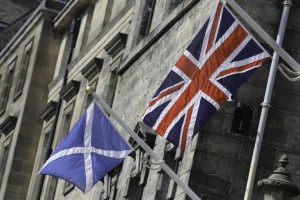 The agenda was very much devolution-focused. It began with a short presentation by the Scottish Government on what it's like working with us (always good to see yourself as others see you). Underlying relations are generally good. Our shared values and shared experience of working on policy or attending the same learning courses help to ensure that connections can be made. But we have to continue to work hard at this. We can be forgetful – of the need to consult with the devolved administrations, of their place in the unified Civil Service and of the different political world they inhabit. That was a message that reverberated: we cannot take our relations with the devolved administrations for granted. We have to put in the effort to understand how things work in Scotland, Wales and Northern Ireland and to build the connections that allow us to make business work.

Adding another perspective, colleagues from some of the UK Government departments based in Scotland – Home Office, HMRC and DWP – joined us for the meeting. Altogether, 27,000 civil servants work for the UK Government in Scotland, sometimes delivering services direct to the people of Scotland, sometimes providing services for people across the UK from offices based in Scotland. That is a considerable and valuable presence and we are working to ensure better connections between those departments and with the Scotland Office and Scottish Government to make the most of Civil Service career opportunities in Scotland.

The formal part of the day rounded off with a gathering of some of the leaders of Scottish civic society, stakeholders by another name. There was plenty of food for thought for colleagues from ExCo on Scotland and its place in the United Kingdom.

ExCo colleagues then held bilateral meetings with, among others, the Solicitor to the Scottish Parliament and her team, Scottish Procurement and Commercial, the Scottish Government People Directorate, and citizenship organisation YoungScot.

All of this served to strengthen our understanding of devolved issues across the business and of how to build the right connections with Scotland.

As the centre of government, with responsibility for the Civil Service and so many of the functions that support it, we have to do all we can to make the unified Civil Service a reality. This visit renewed that commitment.