In the Talent Action Plan we committed to developing a comprehensive approach to leadership in the Civil Service. Today Civil Service Group is launching the consultation process and I would encourage you all to engage with this. We want to hear what you have to say. 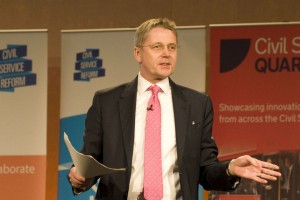 The commitment to a comprehensive approach to leadership responds directly to the voice of civil servants who have made it clear that elements of our culture need to change, whilst also recognising the need to build on those aspects of our culture and leadership that are rightly valued. The leadership strategy will include a single, clear leadership statement that makes explicit what we expect of all Civil Service leaders and how we will hold leaders to account. Such a statement needs to be based on a shared vision bringing in thoughts and ideas from people across the Service. I would like to start this conversation today.

Building on what has already been learnt from last year’s People Survey, the workshops on Civil Service 21 and reviews of wider evidence, we are working to test out the key themes that have emerged. These include:

Over the next fortnight, I would encourage as many of you as possible to share your views on the key themes identified above. In particular, it would be helpful to have your comments on the following:

If you have any other thoughts about the leadership strategy, please feel free to comment below or send them directly to the Leadership Strategy Team: CSLeadership@cabinet-office.gsi.gov.uk