A Service of Thanksgiving, celebrating the life and work of Jeremy, Lord Heywood of Whitehall, former Cabinet Secretary and Head of the Civil Service, took place in Westminster Abbey today.

As well as the Prime Minister, current and former government ministers, representatives of HM The Queen, The Prince of Wales and The Duke of York, and the Permanent Secretaries of government departments, hundreds of civil servants were also in attendance.

The four prime ministers who Jeremy served under (Tony Blair, Gordon Brown, David Cameron, and Theresa May), as well as former Deputy Prime Minister Nick Clegg, made their own personal tributes to Jeremy. And Lord O’Donnell, Jeremy’s immediate predecessor as Cabinet Secretary, delivered the principal address. 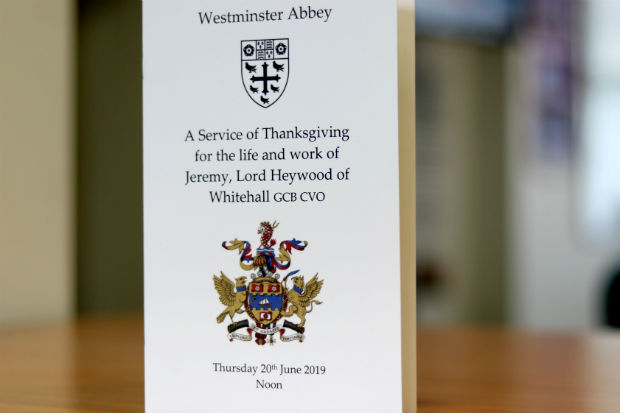 Following readings by Jeremy’s three children, Cabinet Secretary and Head of the Civil Service Sir Mark Sedwill introduced a video of touching tributes and reminiscences from Civil Service colleagues and friends of Jeremy's and members of his family.

In a final Reflection, Jeremy’s widow, Suzanne, Lady Heywood, spoke movingly and inspiringly of her late husband, in particular of his great pride in leading the Civil Service.

Before the service there were musical contributions from the Civil Service Choir, including a rendition of Leonard Cohen’s ‘Hallelujah’. While the video tributes and Lady Heywood’s address were book-ended by operatic bass-baritone Sir Bryn Terfel, singing the traditional Welsh lullaby ‘Suo Gân’, and Cerys Matthews, who sang ‘Don’t think twice, it’s all right’ by Bob Dylan, a particular favourite of Lord Heywood's.